How Does Nestling Stand Mixer Compare With The Competition? 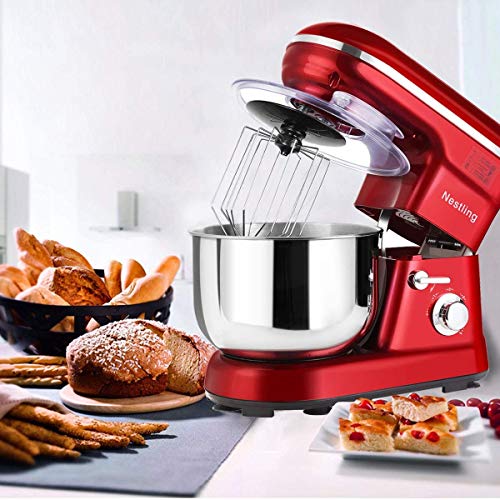 The Nestling Stand Mixer will stand out to many people who want something bright and cheerful in their kitchen.

The shiny red casing on the motor and arm could make a statement. It also seems to be compact enough for small spaces while offering most of the features expected.

But, does this kitchen machine do enough compared to the competition?

The Pros and Cons of this Nestling 5L 1200W Stand Mixer.

The product listing for the Nestling 5L Stand Mixer doesn’t do justice to some of the little details included in the box.

The appeal of this machine goes beyond the ability to mix different batters and into the finer details. There are lots of little user-friendly aspects to this system with the aim of helping users create their best work with minimal mess or stress.

There is a splash guard to go over the stainless steel bowl, little suction cup feet to keep the machine in place, and cord storage at the back. It also seems to be pretty easy for a user to get the results they need for various baked goods. 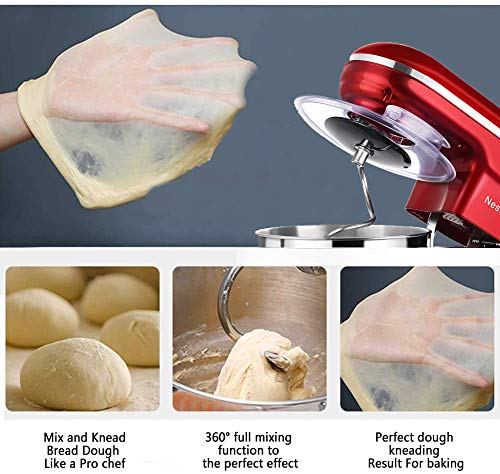 The machine comes with the usual features found in these stand mixers. You get the beater, whisk, and dough hook. However, the listing doesn’t mention a couple of the other accessories found in the box.

One reviewer posted a helpful photo of a measuring jug and egg separator. They look cheap and flimsy – words used to describe other parts of this machine too – but they are a nice touch.

However, there are issues in the functionality of the Nestling 5-speed Food Mixer that let it down.

While the accessories seem to be pretty good, there are other features missing from this machine that are so helpful in competitor’s models.

The most notable of these is the use of five-speed settings where six are far more common. There are also no handles on the mixing bowl. In addition to this, some users have commented on the noise.

Nestling promises a very quiet operation but this clearly isn’t guaranteed. While some can put up with the sound, others are disappointed and worried about the machine breaking down.

Is this Nestling Kitchen Mixer still recommendable with all of this in mind?

The response to this machine is mixed and while there are some people that have trouble getting it to do precisely what they need, others find that it is ideal as a first-time system.

It is noticeably cheaper than some other models from well-known brands, and this could work against it in the long run.

The noise and the longevity of the parts could be the dealbreaker. But, the accessories and ease of use do mean that the Nestling food mixer can still help novices on a budget.