Does The Klarstein Lucia Stand Mixer Bring 3-in-1 Functionality? 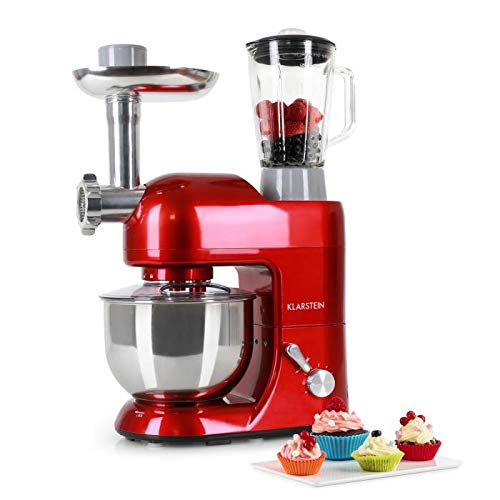 The Klarstein Lucia Stand Mixer looks like the sort of machine that could solve a lot of problems and save a lot of space.

The basic idea here is that instead of just having a food mixer, you also get ports for a blender and meat grinder/pasta maker.

On paper, the idea of a 2-in1 machine sounds great, especially when it also looks like so many of the top stand mixers around. But, can it offer the functionally promised?

The Pros and Cons of this Klarstein Lucia Food Mixer.

The Klarstein Lucia Stand Mixer is a more multifunctional machine with a series of processes and accessories.

Let’s start with the blender itself, as that is the main appliance here. The look and specification of the machine are pretty familiar with the standard build, the stainless steel bowl under the arm, and the same three accessories you always get.

You can use the dough hook, whisk, and beater at a choice of 6 speeds and make use of the planetary mixing function. That 5.2 litre bowl also comes with a splash guard and there are suction feet below. 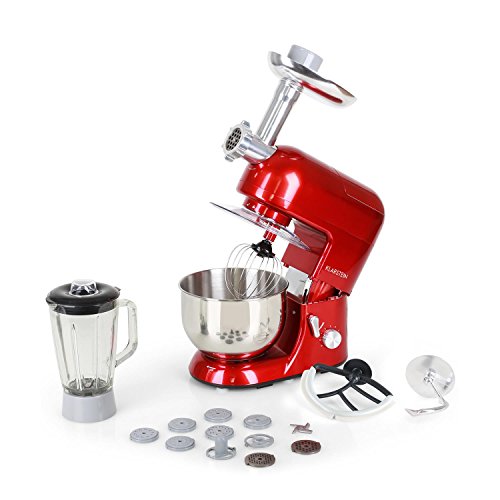 What sets this Klarstein food mixer apart from others is that there are two additional devices to plug into the top. There is a port on top of the arm for a blender and one at the front for a processor.

It is nice to see so many different attachments in the box for that processor, with options for meat grinding and pasta making. With the glass blender jar as well, you should be able to make a wider array of items with one machine.

Also, while you may worry that a machine like this could look like an ugly Frankenstein’s monster, it is actually not bad-looking.

There is a range of colours – mostly warmer tones – including crème, white, silver, red, and orange. So, it could still make a positive statement while out on display in the kitchen.

The problem is that the multifunctional approach of the Klarstein Lucia Combo Kitchen Machine has some negative effects on the performance.

The biggest drawback here is the fact that there when you turn the power on, you direct power to all of the components. There is no way to divert it and focus on one element.

So, you will get the blender running if you have it set up while it is on the mixer. This diversion of power may explain why some people find the processes a little weaker than normal.

The mixing action on the higher speeds could be better and the blender reportedly leaves a few chunks behind.

On a related note, some say that the extra noise and vibrations generated by the different features can get annoying. Housemates and neighbours may not appreciate any early-morning bread-making sessions. 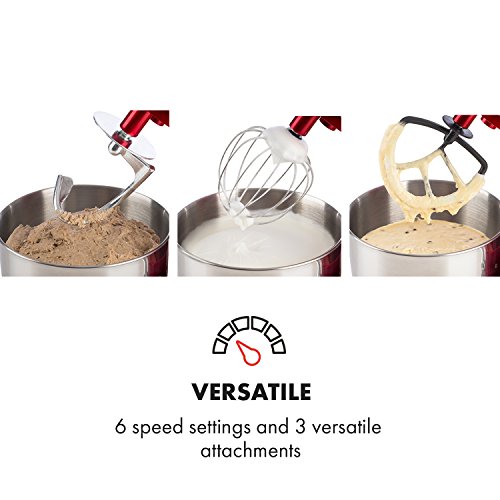 Otherwise, there isn’t much else against this machine other than a lack of instructions. There is a manual in the box, but this focuses more on the mixer than on the additional processors. As a result, some were left confused over the purpose of some of the discs.

Should you still give this Klarstein Lucia Blend, Processer, And Mixer a try as a multipurpose kitchen tool?

A recommendation here comes down to one important question. Is it better to have an all-in-one machine with the bonus processors to save space, even if it means losing some power?

Or, it is better to get three different appliances for a more professional performance? There are downsides to have three elements running at once, but you do still get the chance to play with more recipes and tools.

If you are short on space and prefer the idea of a higher quantity of tools over a better quality single-purpose mixer, this Klarstein food mixer could be a good choice.