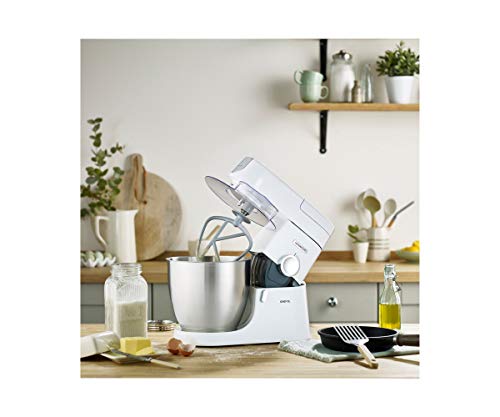 Kenwood machines like the Kenwood KVL4100 Stand Mixer immediately make consumers think that they have found something that is highly effective and build to last for a long time.

This one looks robust and the specification also suggests that it is powerful and effective.

But, is this still a great choice for your kitchen?

The Pros and Cons of this Kenwood KVL4100 Stand Mixer.

This Kenwood KVL4100 Food Mixer is a powerful model with high capacity.

The main benefit of this kitchen machine has to be the power on offer. There is a great 1200W motor that is a little more heavy-duty than that of other machines.

This should allow for a better process on the higher speed settings and efficiency when handling different mixtures. There is also a planetary action to the mixer to get the most out of any batter created. In turn, this should save time and lead to some brilliant bakes. 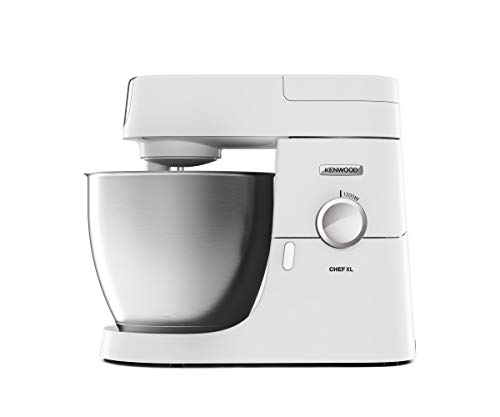 Another advantage of this Kenwood stand mixer is the larger mixing bowl. The 6.7-litre capacity is much more generous than the average 5 litres and this should allow for greater volumes when baking for the whole family.

That bowl is also of high quality and is dishwasher safe, as are the attachments that come with it.

It might have been more beneficial to have a handle on the bowl, but that isn’t a big deal. You can, however, add on a splash guard to help minimize the mess when adding in additional ingredients.

One problem here is that there is too much emphasis on power and performance and not enough on looks. That isn’t really a big deal in the grand scheme of things.

However, there are so many different machines with retro looks and bright colours that simply look better.

Also, some buyers may be disappointed by the lack of attachments. You get the basic set of the whisk, dough hook, and the K-beater. But, anything else has to be bought separately.

There are 25 optional accessories out there should you choose to enhance the machine at some point for more niche baking solutions.

Is this Kenwood KVL4100W Mixer still a recommendable option with all this in mind?

There are still plenty of advantages to this machine. Despite the problem with the look and the basic attachments. Those that see the value in the machine can add other accessories at a later date as needed.

The important thing is that that you get the quality and powerful mixing action that you expect from this sort of mixer. That is why the Kenwood food mixer is still a brilliant choice for most homes.

We use cookies to ensure that we give you the best experience on our website. If you continue to use this site we will assume that you are happy with it.OkRead more