Is The Glass Bowl Of The Kenwood KMix KMX754 Stand Mixer a Pro or Con? 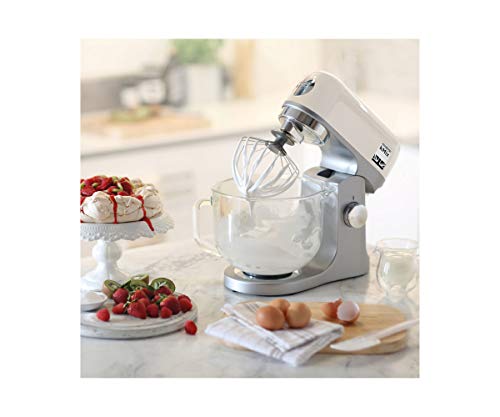 The biggest quirk about the Kenwood KMix KMX754 Stand Mixer is that there is a glass bowl instead of the usual stainless steel option.

There are some obvious pros and cons here and the impact of these will depend on your personal needs and preferences. So, is this alternative model a good choice for your kitchen?

The Pros and Cons of this Kenwood KMix KMX754 Stand Mixer.

The glass bowl of the Kenwood KMix KMX754 Food Mixer is an interesting feature and there are some clever mixing functions too.

The use of a glass bowl like this gives you a better view of the mixture inside and the current consistency. There is also the fact that this bowl as markings on the side for measurements, giving it a secondary purpose.

However, there may be some understandable concerns about the security and durability of an item like this, especially when there is a high-speed whisk bashing into the sides.

This impact of stainless steel on glass could also make the Kenwood food mixer a little noisier than other options.

Also, there is the fact that stainless steel bowls tend to look nicer. Other than that, the functionality is pretty much the same. The 5l capacity is more than enough for general use and there is a handle at for side for pouring. 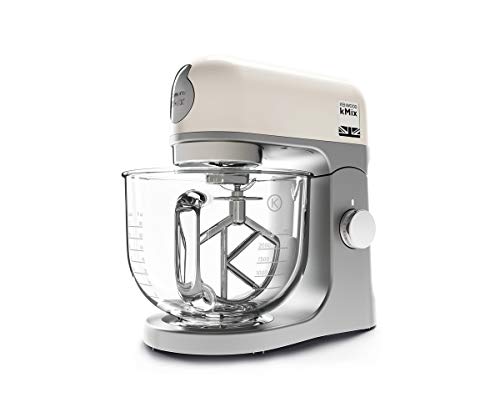 When we move away from this feature, the specification becomes quite familiar. There is a 1000W motor that allows for a strong planetary mixing action. The additional fold function is said to be unique and great for brioche.

There aren’t the same speed settings as other food mixers, instead, you can trust in this kitchen machine to get to work and build up speed as needed for the best results. This is meant to lead to a level of consistency in your bakes that you might not get elsewhere.

The Kenwood KMix Glass Bowl Kitchen Mixer isn’t the prettiest mixer and there are some other factors to watch out for.

If we give the designers the benefit of the doubt and say that this glass bowl is a positive feature, that doesn’t mean that there aren’t other flaws and drawbacks to consider.

One factor is pretty minor but ties back into the idea of this being an unattractive option compared to other machines.

This taller mixer only offers colour on the very top of the arm. Also, those colours are white, cream, black and red, so you aren’t going to get the same fun colours to match other kitchen appliances. 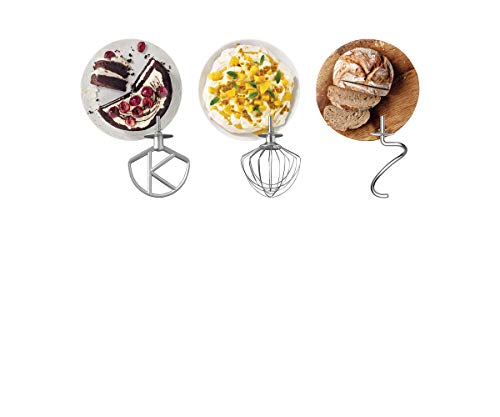 Then there is the issue of the attachments and value for money offered with this model. The listing states that “with over 10 optional attachments, you can do even more in the kitchen”. However, “optional” means at an extra cost.

You get the K-beater, dough hook and balloon whisk in the box. You have to pay more for the meat grinder and pasta roller. As this isn’t that cheap, to begin with, some buyers may feel a little short-changed.

Is this Kenwood KMix KMX754 Mixer the right choice for your kitchen with all of this in mind?

It is questionable if you get enough value for money here. Those that appreciate this kitchen machine and advocate its use would highlight the quality of the attachments, the consistency of the processes, and that clever fold motion for different mixtures.

Those that are less convinced would cite the lack of additional attachments, the standard speed setting, and the boring design.

If you are impressed with the look and specification of this machine – and feel that a glass mixing bowl is the way forward, this Kenwood food mixer could still prove to be a great addition to your kitchen.

We use cookies to ensure that we give you the best experience on our website. If you continue to use this site we will assume that you are happy with it.OkRead more