Is The Bosch OptiMUM Kitchen Mixer Throwing Too Much At One Mixer? 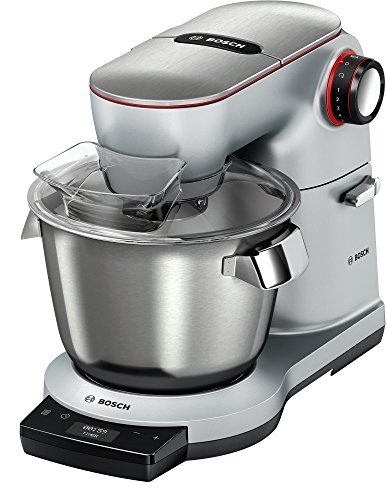 You can find kitchen stand mixers at variable points on the price scale, and the Bosch OptiMUM Kitchen Mixer is definitely at the higher end.

This is a machine that keen cooks will want to add to a wish-list or save for because it sounds like a brilliant upgrade.

There are more settings and features and it just looks more professional. So, how does it actually perform?

The Pros and Cons of this Bosch OptiMUM Kitchen Mixer.

The Bosch OptiMUM Food Mixer has a lot more in the box, and built into the machine, than seen in models from competitors.

The basic functions are pretty good for a reliable mixer with a few added touches here and there to elevate it. For example, the mixer itself is a 3D planetary model that has 7 speed settings instead of the usual 6.

There is also an additional pulse mode. This and the 1500W motor with its smart dough sensor should make short work of the mixture within the 5.5l bowl.

It is a bit excessive to call this “extra-large”, but the capacity is still great for most needs. The handles on the side of the bowl should help too. 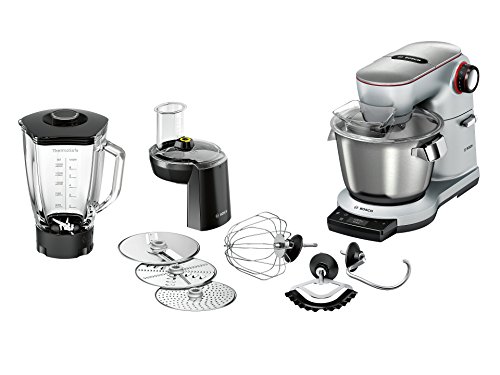 Why is this Bosch food mixer so expensive? Well, there is a sense of better quality here which could raise the price a little further. There are brushed stainless steel on the bowl and strong thermoglass in the blender.

Yet, this cost is largely down to the bonus features of the built-in scales, the shredder attachment, and the blender Although, one is a little more problematic than the others.

The standard attachments are all here, including the whisk, beater, and dough hook, but you can also use the motor to shred and grate ingredients via a simple attachment or to blend things like pestos.

This could make the machine a more multifunctional appliance for a better culinary experience. Users seem to be most impressed with the dough kneading capabilities, but there is a lot to appreciate across the board.

It is easy to question some of the choices made here because of the cost and multifunctionality of the Bosch OptiMUM.

The built-in scales are meant to make life easier by allowing you to measure your ingredients into the mixing bowl as a time-saving measure.

But, this is relying on the scales to determine the difference in weight with a second ingredient, and for it not to glitch or require resetting midway.

Many users are happy with this system and find that it is easy to use. But, it might be a step too far for those that want to be more considered and precise with their baking. 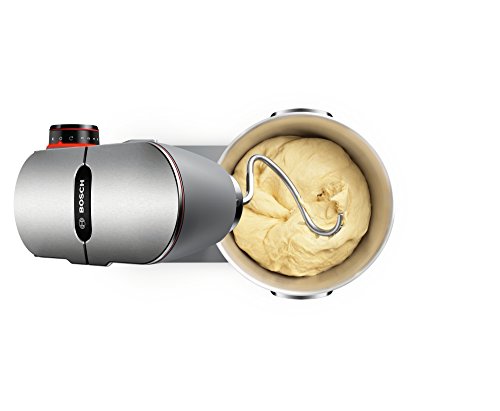 Then there are the issues in detaching and cleaning out the shredder, and with adding the main attachments as they need to go in at an angle. The compact design means that this can be fiddly to manage.

There are also notes from users about what they would have liked to have seen for the price paid here. The instruction manual is brief with a couple of recipe ideas.

A bigger recipe book would have been great considering that there are a blender and shredder in the box to make use of. Another would have liked to see a cover for the machine to keep it nice and clean when not in use.

Is this Bosch Multipurpose Kitchen Stand Mixer still a recommendable choice for your kitchen with all of this in mind?

The scales are a bonus feature that doesn’t really make a massive difference and won’t get in the way too much either. It is an odd quirk more than anything.

The issues with the other attachments could be a little more annoying but are manageable with patience.

Therefore, it is easy to recommend this machine because of the amount that you get in the box. There is a lot here that can diversify the machine and the quality is there too. The Bosch food mixer feels and performs like a more expensive machine, so the higher cost doesn’t seem quite so bad.